Scarily, it’s only one month until we’re at the Edinburgh Fringe Festival! On August 11th we have our tech rehearsal before going straight into opening night on Friday 12th of August at Venue45. Needless to say, we’re excited and terrified in equal measure.

Our crowdfunding campaign, which we launched in May, was a great success, raised 102% of our goal, £621 in total. We can’t believe it! We’re so thankful to all backers and all those who shared our campaign across cyber space.

We made a 15 minute video on early rehearsals back in May which shows ENTRAILS coming together. Needless to say a lot of fun is being had…

Our posters and flyers have gone off to print and people are buying their tickets to see us in August. If you’ve been umming and ahhing over coming to see us you can see more info on the EdFringe website here:

There will be more from us soon as the dance starts to approach its final form, ready for public consumption.

Today we’re delighted – and terrified, but mostly delighted – to be launching our Indiegogo campaign to help us take Entrails to the Edinburgh Fringe. 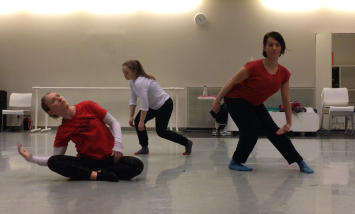 A shot from rehearsals

A little catch-up for anybody who hasn’t been following this project so far: this is Parachute Dance’s first ever production. Entrails is a dance theatre show. Entrails is the vision of our choreographer and director Róisín O’Brien, who has been inspired by the tragedy, the comedy and the themes of human fragility in Catch-22, the renowned novel by Joseph Heller. Since Parachute Dance was founded late last year, we’ve been working hard to make this vision a reality. It’s a hell of a process! The Fringe is an amazingly inclusive arena, but getting a show put on is a demanding task for a group of young people with no financial backing behind them. As well as the fun difficulties – the creative struggles that Róisín and the dancers face as they attempt to put together an exciting, meaningful piece of art which will excite Fringe audiences – there’s also a lot of administrative legwork involved in venue hire, Fringe registration, and organising insurance and accommodation and all of the other logistical complications. And there are a lot of costs.

We’ve tried our best to look for external funding, and we applied to several arts funding schemes. But unsurprisingly the competition for such things is outrageously intense, and so far all of the costs have come out of our own pockets – which isn’t easy given that we’re trying to juggle various part-time and freelance jobs with our various creative ambitions (not to mention London rents!). One of the most significant costs of all is the venue hire – a cool £2000 for a two-week run (August 12-27) at theSpace @ Venue 45. This is paid in three instalments, one of which comes in at £600.

So to help us make this dream a reality, we’re asking for help. If we can raise our goal of £600 from this crowdfunding campaign, then we’re one instalment closer to actually making this thing work. We’re not expecting the show to run at a profit – if we can sell enough tickets to mitigate some of our own losses we’ll be thrilled. Entrails is a labour of love, and we’d love you too if you can help us to make it real.

But this isn’t just about supplication, cap in hand. This is also about asking you to come with us. We’re putting together all kinds of fun perks for people who back the campaign – nothing that breaks the bank, because that would defeat the purpose, but something a bit more personal. Anyone who contributes will get to see behind-the-scenes updates from the rehearsals and the creative process behind Entrails. You really will get to come with us on a journey.

There’s lots of cool stuff on offer at different reward tiers – depending on the amount you contribute. You can get personalised messages of thanks from us, including a wee video of a special choreographed thank-you from the Entrails dancers. We’ll draw you pictures (Laura‘s not bad at drawing) and write you stories (Aran will create characters and a setting of your choice!). We’ll invite you to come and join us in a party in Edinburgh with the cast and production team behind Entrails. And of course you can get some very special loot to keep as well – flyers of the show (want us to sign ‘em? We’ll sign ‘em!) and Parachute Dance pin-badges. And of course if you contribute enough then we’ll throw in a ticket to the show itself. The show which is the point of this whole thing.

Tickets to Entrails are already on sale (eep!) so we want to create a great dance; put on an unforgettable show at the Edinburgh Fringe. We want to be part of that whole scintillating artistic environment of the Fringe. Make a little place for ourselves amongst all the clowns and the dancers and the drama and the dramaturgy of that wonderful city in August.

You can watch our crowdfunding video at the top of this post, and there’s a link to the campaign itself up there too and another one down HERE. Please help us and come with us and be part of this whole mad thing that we’re doing. We’re not looking for a free ride, we’re looking for a few helping hands along the way to making something we think can be really worthwhile. We’d love it if that help came from you.

Or #entrails for you hashtagging types. A couple of days ago we pressed that very scary ‘Register’ button on the Edinburgh Fringe registration software. There’s no going back now. We have our main image from a photoshoot with one of our dancers, Tillie (read more about her here).

A bit more about Entrails, as it will appear in the Fringe brochure:

‘Entrails’ is a contemporary dance theatre piece that presents an urgent, dark, and absurd look at our human bodies. Bodies that malfunction, yet persist. Bodies that are denigrated and manipulated. Bodies that resist.

Inspired by Joseph Heller’s ‘Catch-22’, we confront our fragility, our messiness, and our transience.

That’s all for now. Please check back soon for more info, some rehearsal footage and other goodies.